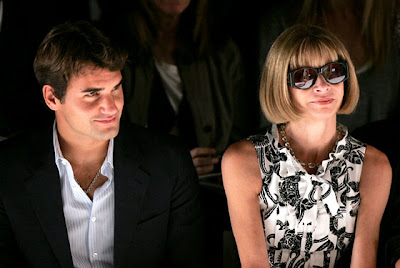 We all know Anna Wintour has a thing for Roger—she's gushed about him in interviews, taken him to fashion shows, and can often be seen sitting in his box during his matches. What we did not know, but should have assumed, is that Anna gives Roger advice on what to wear both on and off the court. NYMag.com reports that Roger said the following at the Nike Primetime Knockout benefit this week:


"I kind of ask her [Anna Wintour] sometimes what she thinks," he says. "I get a very strong second opinion."

"I asked her about the pink color I was wearing last week and she was like, 'Oh, you sure about that Roger?' Too late now! But I got good reviews."

I wish Anna Wintour gave me style advice. But I'd settle for just being invited to Fashion Week.
Posted by Unknown at 8:00:00 AM